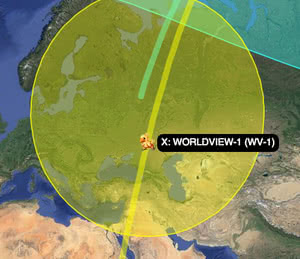 This project used PHP-predict, jQuery and Google Maps V3 API to plot the realtime locations of satellites using ephemeris data from Celestrak.com. Calculations performed on the server-side were sent to the client via JSON data. These calculations find the current velocity and position of each satellite in ECI which are then converted into latitude and longitude and fed into the Google Maps API. The tracker displays the satellite’s current footprint as well as its trajectory of the past and future 10 minutes.

As a final job at Skybox Imaging, I was tasked with developing a usable application to display the current location of satellites in non-geostationary orbits. The website n2yo.com, which does this already has many potential wins for their UI. It has a cluttered interface and unintuitive content placement.